How Far Along:  10 weeks and 4 days
Size of baby: Prune
Total Weight Gain: Minus 19 lbs
Maternity Clothes:  Not yet still trying to hold off. Thank goodness I wear scrubs to work, and when I am not at work it put sundresses on.
Gender: Don't know yet.... Hopefully we will find out in August.
Movement: Nadda
Sleep: Not great.. I've taken all the pillows and left one for Chris.
What I miss: Not being able to eat.
Cravings: NOTHING!! All food thoughts make me nauseous
Symptoms: All day sickness, and throwing up.
What I’m looking forward to:
Finding out what we having. Oh, and not being nauseous anymore, and hopefully getting my energy back soon.. I'm on strike from doing laundry because I have no energy to do it.
Sorry I haven't posted any belly bumps... I look and feel like the Grim Reaper lately. Also as soon as I get home I put pajamas on and lay down.
Posted by carrie1 at 8:30 AM 3 comments: 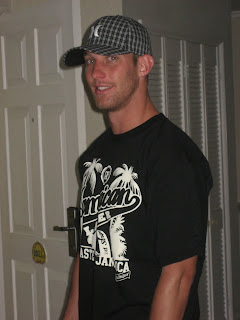 That's how I have been the past ummmm.... 9 weeks.. and I hope to the good lord it ends soon! I don't think I can take myself being irritated and annoyed with everyone for another 215 days!
Posted by carrie1 at 9:13 AM 1 comment:

How Far Along: 8 weeks and 3 days
Size of baby: Raspberry
Total Weight Gain: minus 10 lbs
Maternity Clothes:  Not yet still trying to hold off. Thank goodness I wear scrubs to work, and when I am not at work it put sundresses on.
Gender: Don't know yet.... feels like it is forever away.
Movement: Nadda
Sleep: Is crap.. I can't get comfortable.
What I miss: Not being able to eat.
Cravings: NOTHING!! All food thoughts make me nauseous
Symptoms: All day sickness and a cold.
What I’m looking forward to:
Finding out what we having. Oh, and not being nauseous anymore.
Posted by carrie1 at 6:41 AM 8 comments:

Do any of you have a stage 5 clinger friend? I know that is mean to say, but I have one. I cherish all my friends, but my stage 5'er (who i have known since middle school) is seriously wearing on me!

Not only me, but my sister too.

I cut off all contact with 5'er when I went through my divorce, and just recently within the last year became friends with her again.

She is the type of friend that needs CONSTANT reassurance about people being her friend... she gets her feelings hurt when my sister and I are hanging out. Knowing this my sister and I try to keep it under wraps with telling her when we are doing stuff... but when she finds out she text my sister with a " Well have fun, I won't keep you" or " Well I guess I will talk to you later" just snide little remarks that aren't necessary. My sister and I shouldn't have to hide when we hangout... we are sisters... that's what sisters do.

Not only do I hear about it about my sister and I hanging out.. I have to hear about her two sisters who live in North Carolina and how she feels out of the loop because she isn't around them. I mean we all can't stop our lives just to accommodate her.

She text me 24/7.... and I know I should respond back to her, and majority of the time I do, but if I am at work.. I shoot her a short text and she gets mad..what part about I"M AT WORK.. does she not understand? I can't just stop what I am doing to text her all the time. And since I am on the phone probably 93% of the time at work... I do not want to be on the phone when I get home from work nor do I want to text everyone. As soon as I get home I put my phone on the charger and forget about it.

My sister was the third person I told when I found out I was pregnant, and asked her not to say anything to 5'er or to anyone else for that matter. I wasn't ready to get flooded with text from her or anyone else.

I found out on a Friday night, and Chris and I went out of town on Saturday morning until that following Monday. Tuesday afternoon I shot 5'er a text and told her the news and what do you know... she blew up my phone with text. She proceeds to call my sister and bitch her out because she didn't tell her I was pregnant.. my sisters response was Carrie asked me not to say anything to anyone. And then she text me telling me her feelings were hurt that I didn't tell her the same time I told my sister. I told her that I haven't even told my Mom, Chris' parents or the roommates yet.

I don't get it.... I don't know what to do with this girl. I don't need her stressing me out or her being dramatic ALL THE TIME!!
Posted by carrie1 at 9:10 AM 6 comments:

Anyone else LOVE that movie???  (i live with three guys including chris)

So do I... especially since that will be me come the end of January!!

Minus the whole drug deal stuff... dropping off the baby with three strangers and not having the Dad around.

All in all Chris and I are excited.. still taking everything in.